Solid Rock Red Angus/River Bend Ranch was very fortunate this year to host two summer interns! This is the fifth year that the ranch has hosted interns and we were blessed to have Jesse Feucht from Princeville, Ill., and Andrew Acomb from Whitesville, N.Y.

Jesse is majoring in Animal Science and Industry, Pre-Vet Option and will be a Junior at Kansas State University, Manhattan, Kan., this fall. Jesse says that livestock is his passion, especially cattle. He runs about 30 head of cows with his brother and has worked for a cow-calf producer part time in Illinois. His career goal is to become a large animal veterinarian while specializing in embryo flushing and transfer, while also running his own herd of cattle.

Andrew is majoring in Agricultural Business Management and will be a senior at State University of New York at Cobleskill, Cobleskill, N.Y., this fall. Andrew grew up on a 1,200 head farrow-to-wean sow farm but also has a cattle background with his family running a herd of Angus cows. Andrew aspires to remain in the field of agriculture, primarily the beef industry and and hopes to move to the western part of the U.S. after graduation to find a career on a ranch or work with USDA.

We want to thank Jesse and Andrew for spending this summer with us and helping us through calving season, A.I. breeding season and every other “season” of work there is to be done on the ranch! We also thank their families for sharing them with us and for coming to visit. Best of luck and blessings to Jesse and Andrew as they finish their college degrees and move on in bettering the agricultural industry! 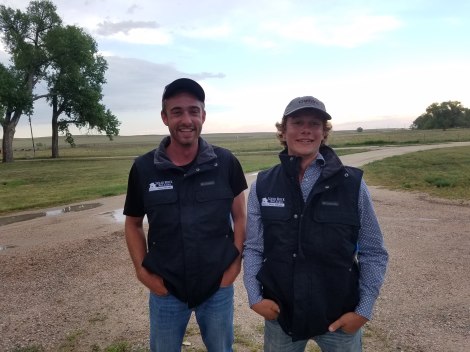 How did we start raising Red Angus?

Two themes are central in the lives of our family: First, our faith in Christ Jesus and secondly, our love for Red Angus cattle. Our commercial Red Angus herd has roots to the early 1980’s, and the registered herd began in the 1990’s with a few heifers our daughters purchased. Add those to our acquisition of the entire registered 7U herd from Lonnie and Janet Frimann and our herd has grown to 80 registered females.